Skip to content
Several weeks ago I was sharing breakfast with a friend when he mentioned that he was preparing to sit the Amateur Radio Service Technician Class examination. He had purchased a software defined radio receiver and found himself an Elmer (radio slang for mentor). I was intrigued.

Several years ago I picked up a copy of the ARRL Technician Class license manual. It occurred to me that if the mobile telephone system were to go offline that I would have a difficult time getting word out to my family that I was alive and well. I knew that unless something deeply catastrophic occurred the amateur radio bands would be open and that I could get a message out to my family via that avenue.

But, life being what it was, I set aside the manual and did not pursue the license required to operate radio equipment on the amateur bands. My friend’s revelation motivated me.

“I’ll do it with you,” I said. I reflected my initial interest from a few years before. I also mentioned that I played with radios when I was a teenager and remembered something about them.

I quickly learned that my license manual was out of date. I ordered a fresh copy and began working in my old copy. When the new version arrived, I picked up the thread.

After a week, I decided I could probably do enough work to pass the General Class examination as well. General Class privileges include a lot more of the HF (high frequency) bands. While I was buying books, I went ahead and ordered the Amateur Extra Class license manual as well. I knew that the questions were valid for another year, so I thought I would work on that after working through the other two levels.

About the end of February I attended my first SIERA radio club meeting. The exam coordinator belongs to this club and invited me down to visit. While I was visiting him, I mentioned that I thought I might attempt all three examinations. He said “That’s very difficult. I can be done, but I don’t recommend it.”

A few minutes later, the club secretary wandered by. “What was your name?” she asked. I told her. “You are going to attempt all three examinations in March?”

“Well, yes I am” was my response. “I might not pass all three, but I think I’m going to try.” So, my intent was logged into the club minutes. There’s nothing like a little pressure, is there?

A couple of weeks ago I found myself passing the General Class practice tests in the 80-90 percent range. So, I thought to myself, I might as well start on the Extra Class materials.

Those materials were quite a lot more technical. There was a lot of basic circuit theory, radio equipment theory, antenna theory, propagation theory, and operational policy. The Extra Class examination comprises 50 questions; the other two classes only 35. The pass rate for all of them is 74 percent.

I failed my first practice examination. “I don’t know if I can be ready for this in time,” I thought. Yet, I continued plugging along, working through the material, working all the example problems, and preparing for the next practice test.

I passed the next practice test. My score was not great, but it was sufficient to pass. The HamStudy website and iPad application provided a lot of practice. The app indicated that I had seen about 65 percent of the questions in the pool and my aptitude was less than 50 percent. I still had work to do and only a week to get it done.

I kept after the material. Once I made it through the book, I continued using the Hamstudy flashcards and practice tests. A few days before the examination date I was passing the Amateur Extra practice tests with results in the 80–90 percent range. I stopped trying to learn new material and spent my last few days reviewing, adding to the holes in my knowledge, and practicing problems.

Saturday morning, I met my friend for an early breakfast. “Are you ready?” he asked. “About as ready as I can be,” I responded. We continued chatting about the radios and the world over breakfast and then headed for the venue.

We gathered with a fairly large number of other attemptees. After a few minutes, Greg, the coordinator, called us to attention and began handing out the paperwork. There were some forms to complete and then we were to hand in our forms and pay the examination fee.

One of the proctors looked at me, “Are you the guy attempting the trifecta?”

“There are about 12-hundred questions in that pool. There’s no way anyone could memorize that many questions,” he remarked.

“Well, I studied all the material,” I responded.

The first exam was distributed. I wrote my test number on my answer sheet and opened the examination. Ten minutes later I handed in my examination. Then I waited while the proctors reviewed my answers. The second proctor looked over the shoulder of my inquisitor, then gave me a thumbs up and took my answer page to check.

A few minutes later I was handed the second examination (General Class) and answer sheet. I repeated the process. I spent a little more time on the General Class examination because I wanted to be sure I caught all the words. I handed it in after maybe 20 minutes.

A few minutes later I received another thumbs-up. I waited for the third examination, knowing it would be more challenging. Soon I had the examination booklet and answer page in hand. Again I filled out the required information and opened the examination.

I do not know how long that exam took me. I know that one of the new proctors (they had two new guys sitting in for experience) was watching me carefully. It was not that he thought I was cheating, he was curious about my approach to the work.

In the 50 questions, there were some I could not remember. (Some of the material is rote memorization.) There were quite a few soft-balls in the lot that were easy to answer. There were a number that I knew, not just from remembering, but I new the material.

I handed in my exam. Again, I got a thumbs-up from the second proctor as the first finished correcting my examination. I did all three classes in one sitting. I was told that does not happen often.

The man watching me smiled. He said “I knew you were going to pass the last examination. You were very focused on the work. Congratulations.”

I am an engineer. Most of my life has been spent figuring out ways to solve problems. Some of them are amenable to mathematical solution. Others require a more intuitive approach. All are based on my understanding of math, physics, and chemistry. This exercise in the Amateur Radio Service licensing examinations was no different. They were not as difficult as my engineering license exams, nor my Master or Ph.D. exams. The Extra Class examination was challenging and there was a real risk I might not pass.

But, I did. I was reminded of an aphorism another operator shared with me. “Do you know what the call the person who graduates at the bottom of their medical class… doctor.”

All I had to do was pass. Once my license is issued, then the practicals begin. I have to learn to operate the radio in real space, not in book space.

I am pleased the ordeal is over. I am looking forward to the issuance of my license and call sign. Then I can operate my radios. It is fun stuff. 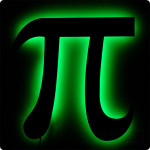 Among other things that I do, I am an engineer. (Yes, I am doomed to a life of social ineptitude, see: this.) I am fascinated by all things mechanical and electrical. Therefore, the value represented by the Greek letter π is of special interest (and use) to me.

And, as it turns out, there is a day set aside each year (in fun) to remember π — March 14. Therefore, at 1556h today, I am taking a moment to celebrate six significant figures of π.

I realize it has been a long time since I wrote anything here. A lot of water passed under the bridge.

Several of my projects all needed work done. Some of it was on deadline and some of it just needed to be done so that other parts of the project could proceed. So I found myself working a lot and having little energy left over for some of the other things that are important to me. One of those things is this space, where I enjoy parking some words and some of the images that I make as I wander through this life.

A few weeks ago a friend and I were sharing our weekly breakfast. We meet at the Red Hut Diner, spend some time bullshitting and some time talking about more serious things, and just enjoying fellowship. We are quite different and that is OK. I think that having people in my life who think differently than I do is not just intellectually stimulating, but it helps me steer away from confirmation bias.

While we were breaking bread and chatting, he told me he was preparing to sit the Amateur Radio Operator Technician Class license examination. I was reminded of my own intention to be licensed. I went so far as to purchase a manual a few years ago. But life got in the way and I let the intention go unattended.

“I’ll sit it with you,” I said. He looked at me, a little startled.

So, after seeing that my manual was out of date, I ordered a fresh copy (they change the question pool every few years and update the manual). I started working through the manual and then decided that I could probably pass the General Class exam as well. So I ordered that manual.

Neither of these manuals are very technical. There is a little in there, but nothing too challenging for an engineer. I emailed the examination coordinator and he gave me the details. He mentioned that one can take all three examinations, although he didn’t recommend that one take all three.

Then the project work was behind, so I was pushing to get work out again as I regained my strength.

Along the way I decided that I would try for the Extra Class license while I was at it. I learn best by immersion. So I ordered the final manual and began my studies while I took practice tests for the other two examinations.

We had a few nice days in this period of time. The sun came out and dried up some of the mud. The Girl and I walked some of our favorite spaces down by Carson River. The red-shouldered hawk in the frame came from one of those walks.

The weather turned cold and snowy again. Today it is spitting snow. The Girl and I will get out in a bit and get a little more walk in. Then I think we will go to the grocery store and retrovision the house. I need some food in the house.

In fact, I just heard her jump off the bed and shake… the ears flapping is always the give-away. My washer load is just about finished, so I can put my jacket into the dryer and start the other load. I should be finished with my laundry tonight as well.