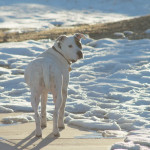 I didn’t get the post quite right in this image. I think the mid-tones are a little off. Yet I like the image because it captures some of the character of my Girl.

The terrier in her wants to be lead — the alpha. I accuse her of “following from the front,” just like I used to my children. She doesn’t really know where we’re going, although she knows many of our regular paths. She runs out ahead searching for “wabbits” I suspect, sniffing, peeing, and sometimes pooping to tell other passers-by “Ki was here.”

To keep her honest, I often call her back in with a “Heel!” If that doesn’t do it, then she gets a touch from the collar. That usually brings her back with a snort. I’ll tell her “Don’t you snort at me!” She often responds with what I call a “blow” — a strong exhale. That’s as if to say “Yeah, right.”

She is a terrier. I call her my “terrible terrier” many times. But she’s really not terrible.

If I wasn’t the leader, then she would be. That’s nature of alpha dogs, be they male or female. She doesn’t really challenge my authority, but she tells me what she wants. I sometimes accuse her of “telling me what I want.” Then again, I used to accuse Wife of same.

Speaking of Wife, I think about her a lot right now. A year ago we were really in the thick of it. With lymphoma cells in her central nervous system, she was scheduled for a marathon MRI study on Friday. I could tell it was bad, although I couldn’t tell her that. I think she knew anyway, although she generally kept her thoughts to herself. It became more difficult for her to interact — speech was difficult. It became more difficult for her to see as well. She complained of double vision.

I knew all this most likely meant she had lymphoma in her brain. The fever, nausea, and physical effects were apparent to me, whether the doctors would confirm or not. I knew Wife was dying.

It would be confirmed for me in a few days when the report of a brain lesion came back from the MRI study. The finality of her disease would be revealed in a couple more weeks. Although I couldn’t be certain, I knew what was happening. My sense of impending loss was heavy. I recall it so clearly now and I feel that heaviness. I suppose this is common, but it’s a first time for me. I am still in my “year of firsts.”

So, on this Christmas Eve I recall the events of last year. I don’t think my intent is to make myself feel bad. Hell, I already do that enough without any help. I think I want to hang on to those memories for they are a part of what defines Wife’s character and my character. They are watershed events that lead up to my change of status from husband to widower.

In a few more weeks I will complete my “year of firsts.” I wrote, I think poorly, about moving forward but not moving on. I am leaving behind my former life as husband and the husbanding of Wife. That is a fact. But I don’t want to move on — that has a sense of deliberation that I don’t have. That is, a sense of deliberate change as if I had left her. I did not. I would not. That is not in my nature.

No, I see this as a time to move forward. I was released from my responsibility as husband when Wife died. Almost all the things that needed to be done after her death are complete. The amount of things to deal with is reducing weekly. Eventually I will achieve my goal of dropping things that are no longer wanted or nor longer useful. I see that as the sign it’s time to move forward to new things.

That means it’s time to figure out what those new things should be. I have part of a plan assembled. It isn’t complete, at least not yet. But it’s a beginning. That will have to be good enough.

Ki needs me. I think I need her more than she needs me. But it’s a good partnership and we have a great interspecies friendship. For now, it is Ki and me.