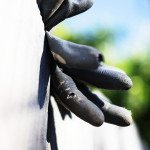 On one morning that seems so long ago, I took the Girl outside for her morning ritual before we began our day. We were living in Sparks at the time with our beloved friend Jimmy and had settled into a daily routine.

On this particular morning, the Girl was making her sniffy-rounds to determine if any interlopers had trespassed the night before. For some reason, something on the fence caught her eye. I watched her as her “hackle” (she doesn’t have enough outer coat to really have “hackles”) rose, her tail rose, and her posture stiffened. There is a tiny ball of fur that fluffs near the base of her tail (Older Son says she “has a mouse in her tail!”) and that expanded to its maximum dimension.

“Woof!” she said, followed by “grrrr…”. She was alerting me to the fact that there was something unusual on top of the fence.

So, of course, I had to make a capture of both the “problem” and the story. I laughed and laughed that morning. I love my funny Girl.

Then, morning business done, we headed back indoors to collect a few things and go for a long walk. It was a good day.