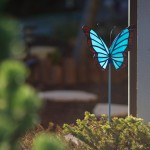 I’ve been working at home a lot the last few weeks. With all the smoke from the Rim Fire, I didn’t want to go down into the valley south from my house. The smoke was always worse there. I have remnants of my childhood asthma to this day and atmospheric conditions like heavy smoke are just not healthy.

So I worked from home. The truth is that I have a better place to work at home than I do at the office. One of the advantages of setting up my own workspace is that I can make it the way I want it. It’s just not like that at an office. In addition, I have control over my environment. I can play a little music lightly while I work. This is good because of my tinnitus. I don’t disturb anyone with my music. I make my own coffee and use the brand I like. I am uninterrupted by my neighbors. I have a quiet house, which means I have a quiet workspace.

As I wrote before, I don’t need anyone looking over my shoulder to ensure I’m working. I’ve been autonomous most of my life and nothing is different now.

The space gives me opportunity to grieve when it’s necessary. I have a profound sadness with the loss of Wife that just doesn’t go away. It’s not awful, but I know what is lost. That’s not going to change. I’m learning to live with it. It will take a long time for this to pass, if it ever does.

“You can have what’s second best, but it’s hard to get enough.” says the David Wilcox lyric. It’s simply true. I had no idea it would be worked out this way in my life. 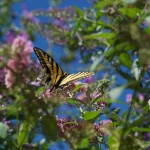 Monday I broke for lunch about noon. It might have been 1230. It doesn’t matter. I haven’t been regimented in a long time. As I sat at the table eating a bite of lunch and looking out the window, reflectively, I noticed a butterfly come into the yard and begin working one of the butterfly bushes. I thought how excited Wife would have been, nearly as much as had a hummingbird come in. (I’ve seen several of them lately as well, and thought of Wife.)

I watched the beautiful insect working the small flowers, fluttering from one to another. I recalled how I learned to call them flutterbyes because of my dad. Wife and kids always got a big kick from that pun. I thought “I should go get my camera,” but elected to finish my bite instead.

When I did, the insect was still working the flowers. So I grabbed my camera (the Pentacon 50/1.8 happened to be on it) and went into the backyard. The light wasn’t great, but no matter. It was an opportunity. So I worked the flutterbye as it worked the flowers.

After a few frames, I decided to run back into the house and grab my Kiron 105/2.8 macro lens. It was already on a NEX adapter, so it was a quick switch to get out the bigger gun. I think f2.8 was a bit thin for depth of field, so I set the aperture to f5.6 and ran with it. 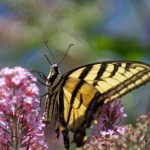 I probably shot 35 frames before the insect had enough of the bush, or enough of me, and fluttered off to the other side of the house.

I returned indoors and set my camera aside. I cleaned up my noon mess and went back to work, reflecting on how much Wife would have enjoyed that and how she would have enjoyed the images. I can still hear her excited voice when a flutterbye would come into the yard. I know she tried to photograph them several times, but could never really get close enough.