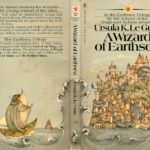 Many years ago, I read a book — A Wizard of Earthsea, by Ursula K. LeGuin. It was partly for fun, for I enjoyed the best works of fantasy and science fiction, and partly a class assignment. For my university literature elective I sat the Science Fiction and Fantasy as Literature class under Eugene Warren. Although the class was for credit, it was for fun that I sat it. In the process, Mr. Warren taught me a few things about literature.

I met Eugene Warren and his wife, Rose, sometime in the early 1970s. I think they were involved with the Intervarsity Fellowship group on the University of Missouri — Rolla (now Missouri University of Science and Technology) campus. But, I cannot recall.

What I do recall is that they were different than anyone else in my experience. On looking back, I think they might have been part of the Hippie Movement from the 1960s. That is what I think, but I am not sure. That they were very different than me was clear. But, they believed God and trusted Jesus and that was all I needed to know.

My interaction with them was episodic, but always pleasant. When I learned that Warren would teach the literature class, I was intrigued. I am so glad that I sat that class. I was introduced to LeGuin and other great authors and still appreciate it.

So, it was a little surprising to me that I noticed an old copy of A Wizard of Earthsea on Daughter’s bookshelf. I had been thinking about the book because Older Son and I watched a Hayao Miyazaki rendition of Tales of Earthsea while I was in Denver a few weeks ago. I pulled the old paperback from the shelf and opened it.

My name was lettered inside the front cover. I had forgotten that these were my books, given to Daughter during one of my recent purges of things. I set the book aside to read it.

Yesterday afternoon I spent some time with Older Grandson. I asked if he had read the book.

“It is the tale of a young wizard learning to be a man. It is a good story and you will like it.”

I began rereading the book, now after nearly 40 years, last night. I woke early this morning, agitated and restless from my dreams and picked it up again. I didn’t want to turn on a light, so I bought a copy for my Kindle. I listened to music and read for a bit.

Then I set it aside and rolled over to return to sleep for a few hours. I remembered Warren and the class I sat so long ago. I decided that the story was worth telling — and the book well worth rereading.