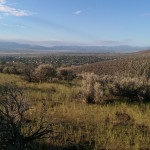 The last few days were a whirlwind of intense activity. Older Son was here to help me prepare the house for sale. Then, once it listed, it sold the first day. I waited until I had some assurance the sale would be consummated before starting my move.

That was a mistake, I think. But it is what it is.

Eight years ago (and change), I left a tenured university appointment and returned to private practice. I was tired, recovering from a clinical depression, burned out, Daughter and Grandsons had just left, and the last straw was a personnel issue. It felt like it was time to move on to something else and somewhere else.

An opportunity opened and it seemed like the right thing to do. So, I moved and brought my family with me. For the first couple of years I was slammed at work, trying to get through the backlog of hydraulic projects that were left in various stages of undone by others. Yes, it took me two full years to clear that backlog. Then, in 2009, the bottom fell out of the housing market and work began to dry up with the fall of housing prices. There isn’t much need for general civil engineering (and the supporting hydraulic and hydrologic work) when the private sector is dead.

I expected to be laid off at that time, but it didn’t come. So, I kept after it, finding small projects here and there. I suppose it was enough to justify my continued engagement.

Then, four years ago, Wife became ill. About this time four years ago, she was in chemotherapy for lymphoma. My focus shifted from work to caring for her. If you follow my weblog, then you know the rest of the story. She lost that fight in January 2013.

As I worked through my grief, I picked up a little more work, but the projects were not plentiful. That process culminated in my engagement ending about three months ago. So, I elected to sell my house without knowing where I would go.

That process is nearly complete. The closing is next Friday. That will bring my tenure in western Nevada to an end. Anticipating that (and there’s no reason to doubt it now), I cleared my house and put my durable goods into storage. I put Older Son on an airplane home Saturday morning, then returned to my house to sort through my remaining things, do a test fit into my rig, and pack those things that would not fit in my rig (but that I wanted with me) and put them into storage. I finished that process about 1700 Saturday night. It being late, I elected to sleep one more night in my house, made my bed on the floor, and crashed.

I woke early Sunday morning, as usual. The Girl and I walked a short version of our regular route. Everything was wet from the showers Saturday afternoon. When we returned home, I began cooking without my familiar tools. I’m using my camping rig and things work differently. It’s all good — I’ll sort out how everything works and it will become familiar again. I ate, fed my Girl, and then took a shower. Then I gathered up my things, stowed them in my rig, and did a last walkthrough the house.

Those tasks completed, I pulled the 4Runner out of the garage and closed the door, probably for the last time. A chapter of my life ended that moment.

The Girl and I headed for Reno to have coffee with our friend Jimmy. This will not be the last time for coffee with Jimmy, God willing. Jimmy might as well be my brother. He is my brother-from-another-mother. We sat at Java Jungle, solved the world’s problems, and talked about my mobile house. I think that I’ll land in Reno again later in the summer and, if it seems appropriate, Jimmy will show me the ropes of finding a solid travel trailer that will be my home — my mobile house — going forward. This is a beginning. A new chapter of my life is beginning and I have no idea where the plot leads.

The Girl and I headed north on U.S. 395. We’re going to go see a friend in Washington. I want to spend a few days with her, work my dog under her guidance, and see a new area. We’ll be there in a few days.

Once past Susanville, California we were in new territory (for us). It was warm, but it wasn’t until mid-afternoon that I decided to put up the windows and run the A/C. I much prefer the air to the conditioning. The Girl snoozed most of the afternoon, except for the pause now and again to stop and stretch legs. I’m on no schedule, so I’m free to move at my own pace. So, that’s what I’m doing.

I decided to pause for the night in Alturas, California. This is northern California and does not deserve the PRK moniker I’m fond of using to refer to this state. It’s a big state and might as well be two, given the differences in culture. I chose Alturas partly because of the Google reviews of the Rim Rock Motel. The place is old-school motel, but it’s not run-down as I normally experience; it’s clean, kept up, and gorgeous. Rory greeted me at the desk, quoted me a (very attractive) rate, and I signed the papers.

Alturas is a beautiful little town in northern California. I think I could live here. I wonder if there is work for me here?

So, here I am. I’m in-between engagements, working part-time for myself, I’m partly retired. I’m houseless and have no plan other than the vague notion of seeing a friend, seeing my in-laws, and spending some time with Daughter and Grandsons. In the meantime, I’ll drive a bit, photograph a bit, and work a bit. This will be interesting.

How do I feel about this change? Well, there is a mixture of trepidation and excitement. So we’ll see where the path leads!

6 thoughts on “One Ending, One Beginning”