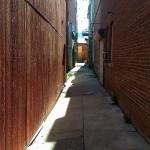 I woke way-too-early Monday morning, probably about 0400, rolled over, and realized there was no going back to sleep. With my restlessness, Ki stirred, lifted her head, and looked at me. She seemed to say “What… are you thinking?” Then she wisely laid her head back down and resumed snoring.

I made some coffee and went out the to 4Runner to get my half&half from the cooler. Ki watched me, not wanting to be left out (or left), but waited patiently for my return and then resumed sleeping. I puttered on the computer for a bit, catching up my email (nothing else was to be done with slow internet) and drinking my coffee. I realized that I might as well get going.

So, I put Ki’s collar on her and we went out for a romp in the wonderful play area at the Rim Rock Motel. She did doggie things, sniffed about, and I made another image or two of the gorgeous irises. Then we packed up the 4Runner and drove back into Alturas to find a few geocaches and refuel the car.

The geocaches were fun. I especially enjoy earthcaches. These are containerless geocaches where the intent is to see some geographic or geologic item of interest. I love the outdoors, I love geography (a civil engineer has to love maps), and I love geology. Earth sciences fascinate me.

On our pass back through town, the breakfast cafe was still closed (and would not open until 0800). So we drove out to find a couple more geocaches. The Chimney Rock geocache was very cool and the Girl and I drove the short run to the real Chimney Rock (need image) to see it. I was planning on making breakfast out there, but the mosquitoes drove me off. So, given it was still too early for the Alturas breakfast cafe, I elected to drive on north and find something else. I would either pull off at a nice place and cook or find an open cafe.

The place was clean and the waitstaff attentive. It’s hard to ruin ham and eggs and they were great. Or, perhaps I was just hungry. Nonetheless, I was refueled and ready to get on with my day.

The morning air was pleasant, so Ki and I walked to a geocache located at the local museum (Historically Fat Log Cache). It was a nice walk and fun find. After the find, it was time to head out, so we walked back to the 4Runner and headed out. However, I was not yet done. There was another geocache I wanted to find and I couldn’t resist being outside in the morning sun. So we stopped by the Oregon Fire Defense headquarters, found the hide there, and walked inside to refill my water bottles. While there, I visited with the young woman in charge of the front. Her brother is an engineer working in the aerospace industry. It’s a small world.

I had asked about engineering firms in Lakeview and it happened that the local general civil engineering firm was located on my way out of town. So, I stopped by and visited with the principal engineer, Daryl, and left my business card. I will follow up with a copy of my resume and perhaps there will be some consulting work for me there.

We drove north, windows down until about noon. The temperature was over 85F, and that’s about the point where I decide to close the windows and run the A/C. The land became more desolate, much like Nevada, with the exception of those irrigated areas, which were lush and growing. Lake Albers was stunningly flat that morning. When we passed Alkali Lake, we came across a group of sand dunes, probably aeolian deposits from the prevailing winds across the lake basin. So, I stopped the rig and stepped out.

I put my hand down onto the sand to test the temperature. It was warm, but not blazing, so I let the Girl out for a romp with me. We bounced up the dunes, she hunting lizards and me just looking around in the warm air. The sand was so fine that it filtered right through the uppers of my shoes and I had sand in my shoes after only a couple hundred feet. Although there really wasn’t much to see, I saw it, made an image with my phone, and then followed the Girl back to the 4Runner. She was hot and the sand was too hot for tenderfoot. She darted under the rig until I opened the door, when she jumped in.

The remainder of the drive north that day was relatively uneventful. It was 106F in Bend, Oregon that afternoon. That’s very hot — Texas hot — and reminded me of many hot summer days motorcycling across Texas. We stopped for the night in Toppenish, Washington, not far north from the Columbia River crossing. I was very tired and crashed early.

I slept late for me, probably 0600 or so. I suppose I was more tired than I thought. I made some coffee and sat down to gather my thoughts for the day. After a few minutes I gathered up my things, staged them, and prepared to leave. Then Ki and I went for a walk in the small park across the street from my lodging. We played ball in the dew-wet grass and enjoyed the warm morning sunrise before returning to the motel to move our things to the 4Runner and head out.

It was not far west before we began the climb into the Cascade Mountains. That was a pleasant change because the air cooled substantially with the sea breeze from the west slope. Although much more humid, the cooler air was welcomed after the blazing heat for the eastern part of Oregon and Washington.

I was ready to be out of the car for a bit and the bed and breakfast was a happy sight. CJ was working in the yard when I arrived. She motioned me where to put my rig, then showed me the ropes of her place. It’s a converted garage, but very nice (much nicer than the motels where I stayed), had plenty of good coffee, and a residential place for walks.

A local church lot was very large and nicely mowed. It made a perfect place to play ball with the Girl. I knew that I was going to enjoy my stay in Washington.