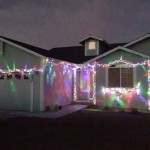 Thanksgiving Day was a week late this year. Every few years, it falls in the last week of November and not the third week. It’s always a bit strange when that happens because then it seems that Christmas comes so quickly.

Young Son and I celebrated Thanksgiving this year as a family. Older Son and Daughter are far away and not here. Wife is gone. We roasted a turkey breast, baked some bread, made some mashed potatoes and added a salad. I couldn’t get the fixings for a pumpkin pie, so I bought a frozen pie to bake. I started late morning Thursday, baked the pie, and set it aside to cool. I prepared a baste for the turkey and put the breast in to roast just after noon.

The baste was a half cup of butter (real butter), a couple of tablespoons of Mrs. Dash, a bit of paprika, and a bit of salt. I melted the mass about an hour into the turkey’s cook cycle, applied the baste, and roasted it another half-hour, then reapplied the baste. By the end of the third hour, the turkey was ready and the remaining parts of our dinner were prepared.

I spent much of my long weekend working about the house. I decided to donate some more books and am clearing some shelves so I have room to store my lenses and cameras. I also had a bit of photochemicals to put away to tidy up my house. My workroom is nearly clear now and I should be able to get the last few things off the floor, stowed, and I can then dust and vacuum my workroom. This is a good thing.

I also spent some time researching film scanners. I have a lot of slides and negatives I want to scan and the little scanner I purchased last year does not handle the film well. So, I think I will buy a Plustek OpticFilm 120 either later this month or the first part of 2014. It will handle 35mm and medium format films, has a good reputation, and the films are held in carriers so that transport works.

I suspect there will be an Epson 750 in my future as well. It will handle prints and films up to 5×7. There is a 4×5 field camera in my future. I don’t know if that will be in 2014 or not, but I’m going to move to large format photography sometime. That’s where the real magic is. There is no way any digital camera can capture the amount of detail and tones that a large format negative (or positive) can.

This morning I put up a few Christmas lights. Wife loved Christmas… it was her favorite holiday and favorite season. I have pictures of her playing Santa for the kids and grandkids and she was always so happy doing that. It was a joy to watch her and I’m blessed for having had that experience.

So, last month I bought a few strings of lights and decided to put them up in celebration of Wife as much as the season. I celebrate Christmas in my own way — by remembering the Gift and the reason for our celebration. I tried to convey that spirit to my children. Only time will tell if that lesson took.

Nonetheless, the lights are up. I called Young Son out a few minutes ago and plugged them in. We stood there for a few minutes thinking about Wife and reflecting on how she would be pleased.

Then my Girl reminded it (not too subtly I might add) that it was her suppertime. “Kibbles?” I asked.

She blinked with her ears forward in admonition as if to say “Well, duh!”

So I fed her and played with her. Now she’s snoozing on her mat under my worktable.