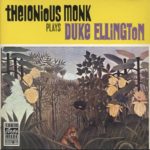 Many years go, Pastor John would refer to Thelonious Monk in one context or another. I was not familiar with Monk and sometimes wondered who he was and what his role in music might be. I wondered if he was an aphorism, much like Dad’s reference to Barney Oldfield, who came up often when I was a young man and learning to drive.

I had not thought about either much until a few days ago (about a week, in fact). A favorite reviewer of audio equipment, the Audiophiliac, mentioned Monk in a music review. I streamed his suggestion (Thelonious Monk plays Duke Ellington) a couple of times on Spotify and was sufficiently intrigued to find a copy of the CD and purchase it.

The disc arrived today. I ripped it to ALAC (lossless Apple) and pushed it to my iPhone. I’ve been listening to it this afternoon. The material is not typical Monk (much to the chagrin of the critics of the time) but is Monk doing his thing interpreting some of the standards of the time.

The material is familiar to anyone who likes music. The recording was remastered in 1987 for this particular disc. I find it amazing that this was recorded in 1955. I was two-years-old. I’m going to enjoy this recording quite a lot. If you like jazz standards, it is worth finding a copy.