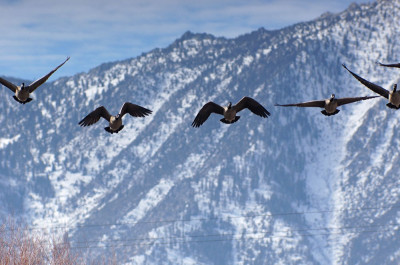 Last Saturday my friend Les invited me to one of the Minden ponds where he believed there might be some “action.” So, the Girl and I headed for Minden early. I wanted a bite and a coffee and wanted to take her to the park to run off her morning energy. Ronald provided a biscuit, a burrito, a coffee, and some oatmeal cookies (hat tip to Wife for the cookies). I refused to sit on the stone park bench, deciding that I’d rather preserve the heat in my butt than sit.

The Girl sniffed around and did her morning routine while I ate. She returned to me several times to check for hand-outs. Of course, she got a couple because she didn’t eat her breakfast before we left. Then we played with a ball for a few minutes and headed for the pond.

Les and I set up near the pond. He brought a blind and some of his odd lenses. I used my NEX for this shoot because it has focus-peaking and a decent live view. It was my first time working from a blind and I learned quite a lot. I came away with a couple of decent frames, but not many.

The waterfowl decided that there would be only a little action Saturday. But I’ll be better prepared next time. And I enjoyed working the blind. The Girl was wonderful, spending most of her time either sleeping next to me in the blind or sunning herself on the pond bank. She had a good time, too, I think.