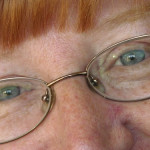 I made this capture more than ten-years ago. Wife and I were on an outing to the Barnes & Noble in Lubbock — it was still in the strip mall where Circuit City and other stores were magnets — and having a great day. We were sitting near the big windows near the front of the store, looking at books or magazines or what-not. It doesn’t matter. We were together and we were enjoying the time out.

Of course, I had a camera on me. She caught me in the act of capturing her candid portrait. I have another capture from that morning of her entire face. But it was these eyes that captured my photographer’s vision. I also adored her eyes. I’m so glad I have this image in my collection.

Yesterday was her birthday. She would have been 63-years old, had lymphoma not taken her from us.

She died early on a Saturday morning. I know I write about this too often, but it is my reality and it’s my weblog. Saturdays will always be a little hard on me. While everyone else is looking forward to the beginning of their weekend, I have that little reminder in the back of my mind that pokes me now and again to remember that Saturday morning. No, it’s not morbid; it is, though, a reminder of my loss and a part of my history.

So, the weekend was a downer for me. I remember celebrating her birthday, if not with family and friends, then with each other. I used to tease her about being married to an older woman… or about robbing the cradle… or about being a cougar. Sometimes I teased her about all three. Then I’d catch a bit of Hell on my birthday when I “caught up” for a few months.

I am thankful for all those years we had. I wish we’d had more, at least a couple of them. Near the end, that’s all I wished for… a couple more years so we could celebrate life together for just a little longer.

I still weep a bit now and again. The memory of Wife remains close at hand. Some tell me that they’re proud of me for being strong, for doing what I need to do to continue moving forward. Perhaps… More likely I’m just surviving for the moment because I have no idea where the path goes. I don’t know if there is one path before me or a countably infinite number of them. Maybe that doesn’t matter either. Maybe my task is just to put one foot forward. Maybe clarity will come from that.

What I do know, however, is that I miss Wife and that yesterday was her birthday. Happy Birthday Old Girl! I still miss ya!