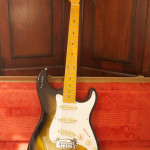 My (new-to-me) G&L George Fullerton Signature model guitar arrived this morning. The FeDeX deliveryman looked at me as I signed for the parcel, “A Guitar?” “Yep,” I responded.

At first, I resisted opening the box. But the need to confirm condition overwhelmed my desire to continue work. So, I cut open the end of the box and removed the tweed case carefully packed therein. I opened the latches and had a good look. The guitar is not perfect, but is in my kind of condition. That is, whoever had it before me cared for the instrument and took care of it.

I removed the instrument from its case and found the vibrato bar. The G&L vibrato bridge is one of the best I’ve ever used. I use a vibrato bridge when playing. That’s what it’s there for and it allows the player to drop and raise pitch, unlike bends, which can only raise the pitch.

I sat on the arm of my chair and played the instrument a little. The wave of emotion that washed over me was palpable. I was completely devastated by the intensity of my feelings. I’m still shocked at the strength of those emotions.

I suppose I repressed my feelings about music and guitars for some time. They jumped up this morning and bit me in the ass.

I put the instrument back into its case and returned to my worktable to try to work. That was a laugh. Instead, I sat in my chair and wept, nearly sobbing, for a half hour. Grief has a funny way of working itself out. My grief returned to me this morning and pummeled me for a half hour or more.

Although I’m still not sure what it was all about, I think my soul is telling me it’s time to pick up the instrument again. My first Fullerton was a marvelous instrument I should not have sold. It reached me at a deep level and was the first electric guitar I bonded with. It was an extension of my body and soul and allowed me to express myself musically in ways that I didn’t expect.

The timing is good as well. I’m nearing the end of my first purge of the house. The garage is nearly done so that project is coming to a close over the next few weeks. I have been wondering what will be next. In fact, I’ve been praying for guidance on what is next. I know when this big project is done I’ll be left hanging in that way that always happens after I am heavily invested in a big project and then it’s done.

My friend and master guitarist Scott told me to find a Fender Deluxe, either a ’65 model or the ’65 reissue. It’s not too powerful, has tubes (and tube tone), and will be a good match for my style of playing, my preferred music, and the Fullerton. I am not going to rebuild the pedalboard I once had, but intend to have only a few effects. They will be a delay, a drive, and a chorus/phaser/flanger.

What will I do with this? I have no idea yet. I think that for awhile my intent will be to permit myself to experience making music again as well as listening to it. Beyond that, I have no idea what will happen. Perhaps it doesn’t matter.