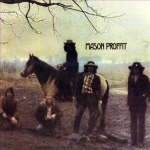 Many, many years ago I came across John Michael Talbot, a fine singer/songwriter, at a Christian conference in French Lick, Indiana. I found a few snapshots from that trip (grossly underexposed) last weekend. Talbot’s work as a Christian musician impressed me. The work was good. The music was good. It was a great combination.

I picked up his early recordings as I could afford them. We had little money in the 70s and at about $8 each, records were expensive. It wasn’t until the late 70s I even had something to play them on.

John Michael Talbot went on to become a Catholic monk and turned his musical focus to worship music. While good work, I thought he lost the punch of his early work. That’s OK — people grow and change and decide to leave things behind in the search for what is next for them.

I knew it, but never acted on the fact that John Michael and Terry Talbot formed an early country-rock band called Mason Proffit. That work was seminal to their work that followed and the work of many other musicians as well.

I’ve been backfilling my music collection with artists I enjoy but do not have their early work. I decided to pick up the Mason Proffit catalog, now that it’s been issued on CD. This is music from the late 60s and early 70s. It sounds like it. However, the work holds up. It’s good work.