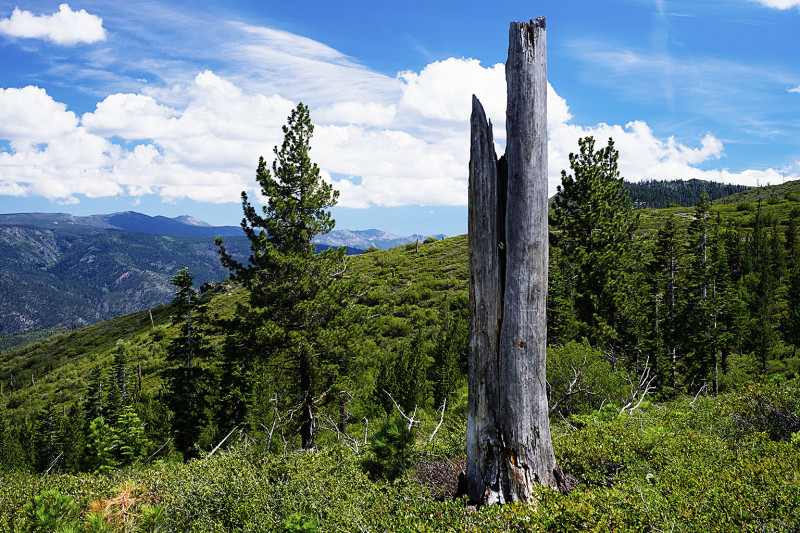 A couple of weeks ago, a bright Saturday morning, Jimmy suggested we go for an adventure. I have another image that I’ll write about later, but the intent was to drive west to Verdi, show me around that interesting little town, and then drive up the trail to the Verdi Peak overwatch tower.

So, off we went. Verdi is an interesting little town and Jimmy knows the history of the area well. He’s an excellent tour guide and I love listening to him recount the tales of the various institutions and watering holes. Verdi used to be the place to come and party. But, with the crackdown on drinking and driving, that function of the town is long passed.

We turned up one of the forest roads and turned and twisted a bit, climbing up in the the pine woods. We stopped for a hunt at the Crystal Mine and hunted for points for a good long while, which was great fun. Then we headed back out the trail.

We worked out way up the slope toward Verdi Peak. There was a pull out along the ridge and we stopped there for a few pictures. Verdi was in the view and Reno could be seen in the distance. The Girl enjoyed hunting squirrels.

I made the capture of “The Sentinel” — a remnant of a fire that occurred here some years ago. Then we clambered back into the 4Runner and started off again. At a fork in the road, Jimmy thought we should go west, but the in-dash GPS showed the only trail heading east. So, east we went, although I warned “I don’t trust the maps on these trails. Sometimes they are not complete.”

Brush scraped both sides of the 4Runner as we headed down a slope. The farther we went, the worse the trail became. There were plenty of rolly-rocks (as I call them). The trail became very steep. It was not the steepest trail, nor the rolliest that I’ve been on, but it was certainly much longer than any bad stretch I previously experienced.

It was bad enough that Jimmy got out to scout ahead. As we negotiated a set of tight switchbacks, I looked at the side of the mountain and thought “If I slide out, this will be bad. There will not be any stopping until we reach the bottom of the hill. I don’t expect to survive that.”

Eventually Jimmy decided the trail was acceptable once again and that a scout was no longer needed. He clambered back into the 4Runner and we continued to ease our way down the trail. Eventually the slope was less steep and there were fewer rocks. A dirt bike came up to us, so I made room for him to pass. That meant that there was access to this trail from the east side. I really didn’t want to go back.

We saw a trail break off to the left (north) of us. It was posted. Jimmy said “That’s where we need to be,” so that’s where we headed.

As we pulled out to the paved road, a homeowner was working on a bike with his son. I made eye contact and said “We got lost and this was the only way out we could find.”

“No worries!” he called back. Jimmy got out to chat (that gregarious Jimmy) and so I stepped out. The 4Runner was badly marked with Nevada pinstripes. Although I really don’t want to mess up my vehicle, I also know that I bought it to use and that it will get marks.

Jimmy rejoined me. “I’m usually the one doing the scaring. That was pretty scary.” I laughed.

“What was I to do? There was no way to go but forward… What would those who gave up do?”

“They’d call for transport to come get their vehicle.”

“I’m not much of one to give up.” I said. So we headed over the the fuel depot to refuel the 4Runner and head home. Jimmy bought iced tea and that was really good.

We stopped at the RV rental place where Jimmy works part time and started buffing out the pinstripes. They were bad enough that we had to go back Sunday morning to finish.

I deeply enjoy driving the trails. However, my rig doesn’t really have the tires for a trail of that kind. Still, it was a very good day, even if we made the wrong turn and had the challenge of working down the hard side of the mountain. Maybe there will be another time to get to Verdi Peak. I might take a chainsaw along, though, and trim some of that brush…