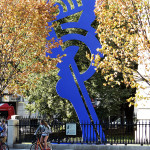 The last week or so has been crazy. First, a week ago last Tuesday (about ten-days ago), my MacBook Pro suffered what appeared to be the Blue Screen of Death and nothing I did would rectify it. So, a trip to the Apple Store in Lancaster was required.

The genius inspected my notebook computer, then ran some diagnostics. The usual suspects turned up (no optical drive, non-OEM battery, failed logic board). I removed the original hard drive and the optical disc last spring and replaced them with a SSD and a larger hard drive. The SSD is for system files and the hard drive is my /usr space. The original battery was swollen, so I replaced it with an aftermarket unit.

The logic board was troubling. I suspected it was a failed logic board. Some snooping around the night before informed me that a replacement would be about $500 or more.

The genius looked at me, “There’s a chance that if a very specific test fails the maker of the display board will replace the unit.” He ran the test while I waited with bated breath.

The test failed. Therefore, I would not be out the $600 (confirmed) to replace the logic board. Nor would I be faced with the “Is it worth the repair?” question. So, I left the machine and returned back to Red Lion to finish some work and prepare for my DC trip.

I left for DC Sunday afternoon, trepidated by having to go to the big city. I’m not a city boy and really prefer the outdoors to city life. But, I had a duty to do so I went.

When I arrived at the Hotel Monaco (a Kimpton property and highly recommended), I learned the topper would not fit in the garage. The valet and the doorman were kind enough to assist me in removing it. They stowed it in the luggage area. The valet took off in my rig to park it.

I went to check in and the desk clerks lost their minds over the Girl. She’s always a hit with people when we are out and about. After I got checked in, we went to our room and I discovered that I left the Girl’s bowl in the rig. So, we went back to the desk.

A new clerk was there and she made over the Girl too. In fact, she came out and asked to greet. So I set up a greet and they were acquainted. The clerk offered the Girl a Milkbone and they were BFFs. When I explained my situation, the clerk said “No problem. I’ll have a bowl sent to your room.”

We went into the hotel restaurant for a light supper — well, a light supper for me and a nap under the table for the Girl. I met William, my server, and we chatted given they were not busy. I learned that William earned a degree in hospitality, but his passion is for training. So, he’s working on his license for personal training and will be going into business for himself.

I enjoyed a nice, light supper, a desert with a tawny Port, and then returned to the room. There I found two very nice stainless steel bowls and a bed for the Girl. I tossed the bed up on the big bed and took the bowls to fill in the bathroom. When I turned, the Girl was peeking over her new bed at me. She loved her little bed!

We walked back out to the front desk and I told them about her love of her little bed. I so appreciated them taking care of us like that.

Monday was all business. I met my colleagues in the morning, we prepared for our meeting, then headed for the Federal Department of Transportation facility. The Girl got to ride the subway (she did fine, even negotiating the escalator better than I do) and visit lots of new friends.

One funny event occurred on the subway. A young man had a set of cans (over the ear headphones) on. He made eye contact with the Girl and her energy perked up. When the train stopped, he made a step towards us to get off the car. “Woof!” the Girl said in her alarm voice and she sat up.

“It’s OK,” I told her, “eyes!” to get her focused back on me. It was all good, but the interaction made me laugh.

The meeting was challenging because of the way our scope is structured. The report was only half complete, so the relation between completed sections and sections to be completed was not present. That made the reviewers’ job quite difficult and it was reflected in the comments.

The Girl snored under the conference table, which made us all laugh. I think we all wanted to be snoring, actually.

I was relieved to have the meeting done. It was time to debrief and share an evening meal together.

My intent was to leave Tuesday, but I elected to stay over an extra day so I could see some places of interest. The Girl and I rose early Tuesday and walked down the National Mall. I have captures of the Washington Monument, the WWII, Korean War, and Vietnam War memorials, and Lincoln’s Memorial. I’ll probably post a few of them over the next few days both here and on my Instagram account. I deeply enjoy those monuments to our heroes.

The Mall is a mess of new construction, or rather reconstruction as they are renewing the turf and a number of the facilities.

We walked back past the White House, then turned east on F Street and headed back to the Monaco. I was hungry and she was hot, so we stopped into Nopa for a bite of lunch and a rest. It was good to be cool and the food was very good. One of the waitstaff was familiar with service dogs and made over the Girl.

We took a break in our room for a bit. Then we walked across the street to the National Portrait Gallery.

That was a hoot! The Girl had never seen so many of the things in that building. Much of the sculpture caught her interest. It was fun to watch her look at things. She was so engaged with her surroundings, yet she still paid attention to me.

Tired and hot, we returned to our room and I got a light supper from the restaurant. They had seared halibut and that was very good and about the right portion size for me.

Wednesday morning we rose early again and humped it to the Jefferson Memorial. Jefferson is one of my heroes. He was intelligent, hard working, and had insight into what was going on. That insight travels forward to today, in my opinion, and the mess of politics we find ourselves in. I don’t think he believed the Constitution to be a holy document, but I think it would appal him the degree to which it is neglected by school children of our time.

Park personnel were in the process of washing the interior of the memorial, so it was roped off. One of the workers let me in to get a couple of frames but about the time I was ready another worker shooed me off. I had to laugh.

The Girl and I humped it back to the hotel and made it just in time for me to grab a shower and make it before 1000 for a bite of breakfast. I really wanted my eggs and I just barely got them.

It was then time to wrestle the Yakima back on top of the 4Runner (thankfully I had help) and head home.

We stopped in Lancaster on the way home to retrieve my Mac. It was all fixed and someone else paid for the new logic board. I’m really glad to have my machine back.