After leaving Craig, Colorado I started working my way west. I paused a few times along the way to hunt for a geocache (and to get out of the car and enjoy the outdoors). The Girl, as always, really enjoys these stops. She travels well and is happy snoozing on the seat beside me, looking (and sniffing) out the window, and long-range cuddles (me stoking or giving her scratchies). What a wonderful companion.

We puttered along the way, enjoying the cool air and the bit of misty rain that we encountered. It was amazingly cool for summer — about 65F. I had to roll up the windows or be cold.

As I thought about our route along U.S. 40, I recalled seeing Dinosaur National Monument located near the Colorado-Utah border. Not knowing when I might again be this way, I decided to forego making miles and enjoy a diversion for a few hours enjoying the park. So, we stopped at the eastern welcome center and went inside. A ranger greeted us after finishing his visit with a small group of tourists. We chatted for a bit about his work and the park.

“The east side of the monument has the views and the altitude. The west side has the fossils and the heat.” He told us.

I elected to go for the fossils and save the views (and altitude) for our next visit. Perhaps by then I’ll have my mobile house and can stay a bit. It would be interesting to work the landscape with my cameras.

So, off we went… west. We paused in between the two parts of DNM to capture a geocache. When I clambered up on the ridge to get the hide, I glanced in both directions. U.S. 40 spread out before me in both directions. Each provided a distinctly different view. I liked the light better to the west and made this capture with my HTC One mobilephone and immediately made an Instagram post of it. Now I’m sharing it again, but this time with the story. What a great view of the arid west. I love this part of the country.

The Girl had a blast chasing rabbits, squirrels, and chipmunks. I had to call her back a couple of times because she’s always at risk of getting lost. In her prey-driven focus, she’ll completely forget where she is and where I am. She’s smart and dingy — an interesting combination. She could probably find me with her doggie-sense (perhaps not as good as spider-sense, but pretty-damned-good nonetheless), but she forgets to use her best tools. I often accuse her of being my blonde bitch. [Yes, I know that’s not PC; I don’t care.]

As an aside, I’ll add that I tell people that I like “big-chested blondes with tight asses” and then give the Girl a pat. Wife used to tell me “David! You can’t say that!” to which I would respond “I just did!” And then I’d smile. When I say that, I can hear my Dad’s voice. It is something similar to those things he’d say. I still miss him and he died 20-years ago. Bummer…

We scrambled back down the bluff and headed west in the 4Runner. As we lost altitude it became warmer. The atmospheric lapse rate is still a physical reality, I suppose. It wasn’t long before we found the turn-off to the Welcome Center on the west side and pulled in. There were quite a few cars in the lot and it was much hotter. It was too hot to leave the Girl in the rig, so I put her vest on, retrieved a banana for myself from the on-board stores, and we headed for the center. The Girl took time to sniff a bit and pee, then we walked up to the door.

We were greeted by a ranger who immediately took up with the Girl. I set up a greet and permitted the ranger and the Girl to interact while the ranger told me about the bus to the quarry. She said “follow the bus in your rig and the driver will open the gate for you. You can park at the top.” Having the Girl in-vest is a very good thing. 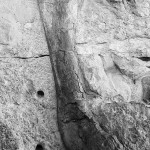 We went inside and bought (for a buck) a self-guided tour of the western part of DNM. Then we returned to the 4Runner and followed the directions. As instructed, the driver paused at the sliding gate, asked me about access, asked about the Girl, and how many in our party. Then she opened the gate and I followed them up to the parking area. We walked into the quarry building and then enjoyed an Earthcache and the view of the pile of fossilized bones. It was a genuinely enjoyable part of my journey and I took a lot of pictures inside the quarry, then outside from the parking lot.

After an hour or so, we headed back down the hill and started the self-guided tour. I was particularly interested in the petroglyphs and the old cabin where a woman lived and worked until she was in her nineties. Those are stories for another time, I think.

Hot and tired, we finally left DNM and drove into Vernal, Utah. Vernal is a bustling little city that seems to be thriving. We found a motel (The Weston Lamplighter — recommended) and went inside. They are no-pets, so I declared my service dog, provided some documentation, and checked in. We pulled over to our room and unloaded.

I wanted some Mexican food, so I spent a few minutes researching (Google is your friend, in this case), picked a place within walking distance, and off we went. The Plaza Mexicana was busy, noisy, and warm. I ordered a margarita and a meal (enchiladas) and enjoyed the drink and the chips. The salsa was a little authoritative so I ordered a second margarita. 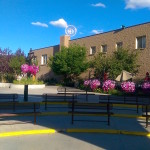 Margarita! OMG! The second must have been a double! The food was very good, the margarita was great, and the sopapillas were passable. (I ate them!) Then we “meandered” our way back to the motel, or rather I “meandered” with the Girl wondering what was wrong with me. The evening light was good, but there was something wrong with my eyes, so my captures were less than optimal, to say the least.

Fed, hot, tired, and a little buzzed, I fed the Girl, we went out to the grassy area so she could have her toilet, and then retired for the evening. The A/C was great and there was little on TV. All was good after a long, enjoyable day and I fell asleep readily.

2 thoughts on “On to Vernal, Utah”