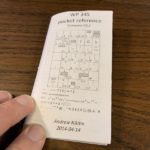 A friend introduced me to the unit last summer. I was immediately intrigued and decided I had to have one.

The 30b is one of the newer HP designs — light, inexpensive, and with marginal keys. It does not compare well at all with the classic HP designs. Even my HP-48GX has much better keys and a much better heft to it, although I do not particularly care for the larger form factor. The 48 is a big calculator, not a pocket calculator at all, and that is required because of that large screen for display of graphics.

But I digress. I can (and probably will) write about calculators at some length. I think that I mentioned that I purchased one of my long-past objects of lust, the Hotel Papa 41 Charlie Xray (HP-41CX), some time ago. Of all the calculators I have used over my long career, I still think that is one of the best, if not the best handheld.

The 34s is not nearly as expensive, it is small and light, and will likely serve as a carry calculator to go into my kit. The unit conversions built into the software are very useful. The 30b has a decent display that is legible even with old eyes. I think this will be a useful machine. 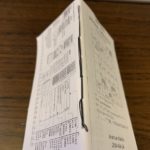 The instructions recommend hand stapling the booklet once printed and the first cut is completed. That means drilling holes for the staples and manually folding them. (This can be avoided if one has access to a saddle-stapler.)

I thought this was less than elegant, so I drilled my first instance of the manual and stitched the binding. The end result is not perfect. I expected this because such projects usually require an iteration or two to iron out any wrinkles. Therefore, I think I will make another sometime over the next few weeks and do a little better job on the stitching. I will also take the cover to the print shop and have it printed on card stock in color. I think a little more attention to the fold (probably need to score the pages at the fold before assembly) and a bit of bookbinder’s tape on the spine will produce a nicer finished product.

After months of hunting and waiting on the-bay, I finally bought a Vivitar Series 1 90mm f/2.5 macro lens — the Tokina build. This lens is called the “Bokina” for obvious reasons. Something spectacular happened in the optical design that resulted in very smooth out of focus backgrounds. Hence derives its nickname.

I bought mine in Nikon mount, which means it will work on all of my Nikons, be it a film or digital camera. I am going to enjoy working with this lens. It is a classic by numerous standards.

I stopped in Rigby, Idaho on my way east. That would be a few weeks ago, now. The Girl needed an outing and I don’t really like to stay in a motel room all the time, so we got out and wandered over to the city park. While we were there, I noticed this old gun. My guess is that it was once mounted on a warship, perhaps from WWII or the Korean War. In any event, it now resides in a city park — a reminder of our veterans and the machines they used to do the job.

After a little research, I found this article on the Bofors 40mm Gun. If you have an interest in such things, be sure to look through the archive of images. I love historical images and there are some great captures in this archive.

I can only imagine what it must have been like to be one of crew members operating this gun. I know that the crew hand fed the magazines using stripper clips of cartridges. That must have been crazy, with all the racket going on, not just of this weapon, but all the others adding to the noise and confusion.

I had so much fun with the gun, that I made a second image. I’m still amazed by this machine… no, I’m in awe of it, especially after watching the video. 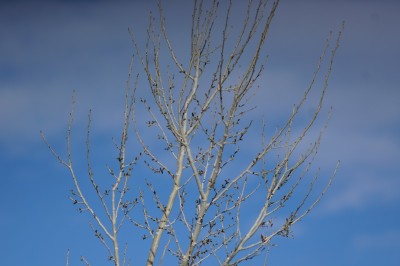 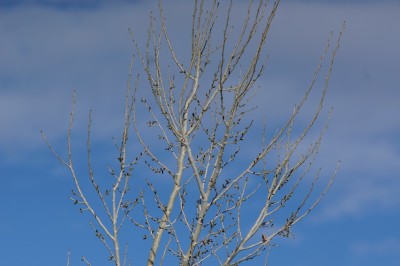 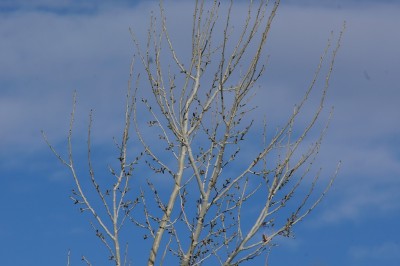 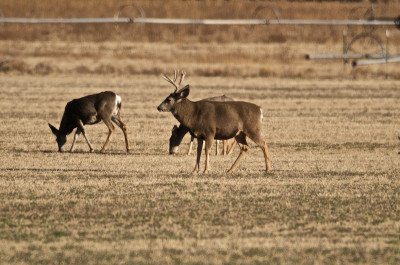 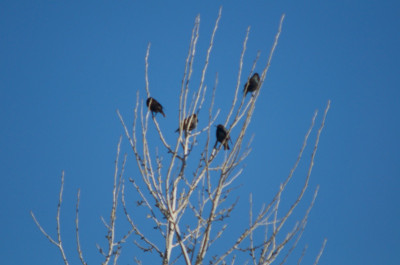 The next frame is the test shot at f/8. It’s better. 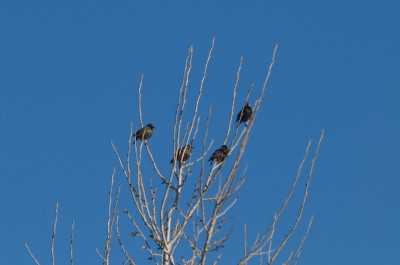 The final frame is the test shot at f/16. It’s reasonably sharp. 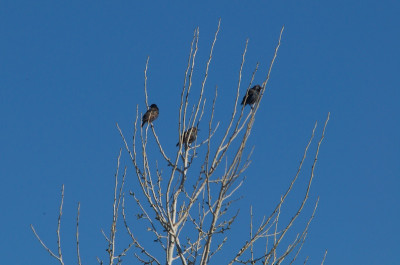 So, here’s my take-home lesson. The Vivitar 400mm f/5.6 telephoto lens is unacceptably soft wide open. It’s better at f/8 and good at f/16. That means if I need a large aperture because the light is failing, this is not the tool to use. If it’s reasonably bright (where Sunny-16 is good), then the lens is useable at f/16 (maybe f/11) and can produce decent images. But, don’t let your friends shoot one of these wide open. It’s irresponsible photography and will frustrate everyone. 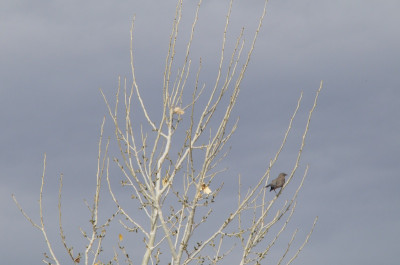 I have a Vivitar 400mm f/5.6 in my stable. The 400mm is not a focal length I use a lot, but it has its place for long shots, particularly of wildlife of both four- and two-footed varieties. The shot was handheld (braced against the door) from my back door. The birds were in a tree about 80–100 feet away. They are sharp enough, but not the kind of razor-sharp image I’d like.

I’ll have to put this lens on a tripod and reshoot. I don’t know if it’s inherent in the design, the focal length, or is a reflection of poor camera technique. 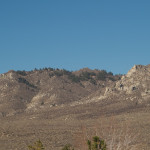 My friend Jimmy loaned me a Tokina 28–85/f4 zoom lens in Nikon mount a couple of weeks ago. The lens isn’t particularly fast, but it’s the right focal length for both my D300 and my Nikon film cameras. It’s a chunk of glass and the build quality is excellent. Focus is smooth but not too light. The zoom action is internal (it’s a two-touch zoom) and has no creep. It’s a good match for the dSLR although it’s a bit of a chunk on the Sony NEX-5N, but then what isn’t a chunk on that itty-bitty body?

The lens has been out and about with me several times on the D300. On the crop-sensor camera, it’s in the range from normal to medium telephoto. It’s a little slow to isolate a subject well, but the optics are quite good. I shot the image on morning walkies a few days ago (with the Girl) at 85mm and about f8. It’s sharp enough, especially for a zoom. Color rendition looks neutral to me.

When I grabbed the lens for a closer look, Jimmy said “That’s the last I’ll see of that lens.” He’s probably right.

I’m in the market for a small camp stove. I was originally thinking about a charcoal grill that I could use while solo car-camping. However, this is an interesting device and they manufacture a larger device that can be used at home.

I can see the larger device as an event stove should I lose power for more than a few hours. However, until they elect to sell them here in the US, I’ll have to do with the campstove and not the home stove. It will eliminate the need to get the big grill going if I only want to grill a hamburger or two and a couple of hot dogs for me. The big Weber grill uses a lot of charcoal and it’s too much for just one man. I need something smaller.

I’ll think on it a bit more, then make a decision. It’s sure a neat device, though.

A few days ago, for whatever reason, I took the notion to look at a Nexus 7 (2013). I love my iPad, but it’s big and I find it not very comfortable to hold for long periods of time. It’s a great netbook replacement, especially with an add-on Bluetooth keyboard. But I find it a bit much to use as a handheld device.

I thought about the iPad mini as an alternative, but it doesn’t yet have the Retina display and I’m not going back. So, when I read the announcement for the new Nexus 7, I thought “Why not? I haven’t tried an Android device and I might as well learn something about the iOS alternative.”

I didn’t think Best Buy (my favorite big-box store) would ever get a 32GB unit in. I’m not that enthralled with an Asus unit either (Asus has a bit of a bad reputation). But, BB finally took delivery of a 32GB unit and I have a 45-day return period. So, I took a new Nexus 7 home to play with.

My initial impression is pretty good. The build quality (at least external build quality) seems fine. The device has a nice heft without feeling bulky. It’s a bit wide, but definitely holdable in one hand. It’s wide screen is eminently viewable and the resolution is wonderful.

I don’t see any color issues with the screen, but then I haven’t really compared it to anything else. It’s plenty good enough for a tablet.

The device is very quick. Applications load quickly. I’m not a gamer, so that’s irrelevant to me. But I suspect it will be be a fine gaming platform if that is your, um, game.

I did find one issue to date. The GPSr was not working in my device. A quick search of the interwebs revealed this is a common problem. On a whim, I elected to power down the device and retart it from cold.

After I did that, the GPSr worked right away and I got a satellite lock with any issue.

Android is an interesting operating system. It’s far more configurable than iOS (which is one reason my iOS devices are all jailbroken). The application store had all the tools I’m used to using (WordPress interface, Dropbox, Evernote, and a few others).

This is interesting and I’m enjoying working with the new device. I’ll know more after a week or so. I might have to do a more complete review then.