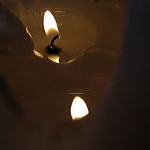 Many years ago, Anna Hutto wrote a song entitled It’s Better to Light a Candle (than to curse the dark). I picked up a copy of her CD when she visited Lubbock Bible Church all those years ago. The song was good (as are many of her songs) then and it’s good now, ten- or fifteen-years later. I have this candle that Wife used in Daughter’s wedding. Somehow we ended up with it. It’s been in a box for a long time. I pulled it out during my garage purge, then set it aside. I like candles.

A few weeks ago I was working through a book about grieving for men, The Widower’s Toolbox. One of the suggestions was to burn a candle. So, I found this one, put it on a glass candle plate, and placed it in the center of our dining table. This is the table we spent so much time around the last couple-three years, solving the world’s problems as well as our own. I light the candle, sometimes a couple of times a day and use it as a remembrance of Wife and our joint lives. Somehow the capture seemed obvious to me. It was dark and snowy this morning, as dark and cold as my soul. It was the perfect moment to capture a live flame. I shot the damned thing with my mobile phone. Then I set it aside for processing, but it didn’t really need very much adjustment.

A year ago today was Thanksgiving. I’m remembering that time through my journals as well as my wetware memory. I’ve been in funk this week. It was a year ago Tuesday that Wife’s mid-course PET/CT revealed residual disease. That she might die became real for her this week a year ago. She wasn’t feeling well and the sadness of her imminent death, or the increased likelihood thereof, weighed on her. She slept most of Thanksgiving Day last year. A friend brought us a meal and we shared it, but there wasn’t a lot of joy that day. There was thankfulness, yes, for the years and for each other, but there was also a heaviness over us as we processed the recent news, each in our own way.

My poor Wife was not feeling very well those days. She had good moments and made a real effort to participate in life. But the stress of all the chemotherapy pressed on her. The hard news of her residual disease, the unknown that presented, and the attempts to find a place for her to get radiotherapy to reduce the remaining disease were hard. There’s no telling what the residual disease was doing to her at that time. I suspect her CNS involvement began about this time, but didn’t manifest symptoms until early in December. When those symptoms presented, it was obvious to me though the doctors were dismissive.

I wrote quite a bit in my journal that Thanksgiving day. I processed what I learned from the UCSF medical staff and spent a lot of time reading medical literature. I didn’t like what I read, not because I don’t like facts, but as I worked through the studies of her kind of lymphoma, the impact of recurrent/refractory disease, and the prognosis for those whose disease returned I was dismayed at the probability of a cure. Her attending physician at UCSF told us that with active residual disease, about ten percent get a cure. With the lymphoma knocked down, the probability improved to 60 percent. The probabilities I extracted from the medical literature varied from these, but that is the nature of statistics. Regardless, I didn’t like what I was learning and was dismayed.

I kept it all to myself, leaving Wife to focus only on the tasks before her. It really didn’t matter what the statistics revealed. Every person is an individual and statistics apply only to groups. Furthermore, there was a path before us to walk. I was determined to walk it all the way to the end with Wife, however things turned out. With the retrospect of nearly a year, I would change nothing but the outcome. We did what we were supposed to do. We didn’t give up.

In my journal, I told myself that if Wife died, I’d give this job and this place through 2013 and then think things through again. Now, as I approach the end of 2013, I wonder. I have almost nothing to do at work. It’s making me crazy, drawing pay without work to do. I don’t have enough leave or I’d just head out… somewhere. I have no idea where, just go. I’d take unpaid leave, but we don’t do that at my company.

There are four projects on the horizon for 2014. That means there are probably four more small projects that will happen as well. It’s probably enough to keep me employed here, if I want that. I ask myself, “Do I want that?” but have no answer. I do not know what I want, except to be productive somehow, somewhere.

I think I can hold on until the first of the year. My boss is unwilling to release me. I hope there is work then. If there is, then I’ll give it another six months. Then I’ll review again. After that, I don’t know. But who knows anything about a day out, much less a year?

What will I do? I have no idea. But I’d sure like someone — or Someone — to tell me.