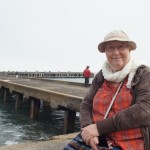 After Wife died in January, an old friend and former student set up a GoFundMe site as a memorial to her. He knew that winding things up was expensive and a practical way to help was to provide some money to help with the short term expenses associated with a person’s death.

Well, I am not good at taking money (or much else) from others. There’s something in my wiring that resists such things violently. It’s not that I don’t appreciate help; I just don’t accept it well. I do not understand that part of myself.

So, the money that was donated sat in that account until now. I wrestled with what to do with it for some time now. I come back to the problem now and again, then table it once more. In general, I’m not that indecisive. There are exceptions, apparently.

What I’m going to do is allow the site to run until the end of October. Then I’m going to take whatever funds are there and write a check to the Leukemia/Lymphoma Society. Check them out. It’s a legitimate organization.

When Wife was sick, the social worker at UCSF told us about LLS. They offer financial support for families dealing with the diseases. Although we were outside the income range for much support, they wrote us a check for $100 to help cover fuel costs. My expenses were crazy during her illness and even a hundred bucks helped. So, I was thankful for the fuel.

Now it’s my turn to pay that back. As I wrote, I’ll take whatever resources are there at the end of October and write a check to LLS for that amount in Wife’s name. Then the folks at the LLS can help others who are struggling with the disease.

The link to Wife’s memorial is http://www.gofundme.com/1x57xs.

Edit: I forgot to mention that I’ve been writing a check to LLS every couple of months… just because it’s the right thing to do.