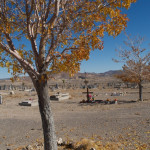 We rose early enough on Thursday, but I just couldn’t get it in gear. I was tired and restless and missed my home routine. I like to rise, make some coffee, and work a bit, read my email, and write. Then I get a shower, make some breakfast, and get started seriously on my day. There’s a walk in there sometime for the Girl and me because we both need the outing.

When traveling though, it just doesn’t work that way. I really want a way to travel where I can cook for myself when I want to. I’d prefer to make a sandwich in the morning for my lunch break, then find a quiet place to stop, enjoy the outdoors, and rest while I eat. I thought about buying a small travel trailer, one just big enough for the Girl and me. I could easily use KOA Kampgrounds as a base of operations while on the road, whether I used their other facilities or not. There is something attractive about having your own place, even when not home. I’ll have to think on this some more.

We got away, finally. I had planned my geocaches along my proposed route. They were downloaded to my iPhone, but saved off-line in case there was not a signal. I figure I can find the geocache without mapping if I can navigate with the iPhone GPS to ground zero, then start looking at likely places. This is working for me and the mapping is great when I have a signal.

We wandered over through Deming, New Mexico, then turned north on US 180 headed for US 191. I think I’ve been through this area one other time, many years ago on my motorcycle. It’s desert, sunny and warm even in October. We enjoyed having the windows down again. There was some traffic along the road, but not too much. The radar detector picked up a couple of working LEOs, but I was legal and didn’t even think about it.

The planned geocache stops were generally in groups of two or three and were 40–50 miles apart. I use the stops as a break from driving, particularly when I begin to tire. The process of getting out of the 4Runner, wandering around for a few minutes, and getting some exercise helps clear my head.

We drove through the Guadalupe Wilderness and stopped at an overlook. I don’t think I got a decent picture of the site. I’m not sure the gear I had with me could do it justice. The location would have been perfect for a field camera, a normal or short telephoto lens, and black and white film with a yellow or red filter. Maybe someday I’ll drive back that way with the required equipment and knowledge to operate it. I think a late afternoon shot with the sun low would be it.

There was no one else at the overlook. The Girl and I had it to ourselves. We enjoyed the quiet outdoors. She took it all in in her inimitable fashion, with wandering around, sniffing, marking, and keeping one eye on me. I catch subtle glances from her, checking to see where I am and what I’m doing. They are quick, usually with her nose to the ground, gathering scent molecules that she processes. I love to watch her work. She fascinates me.

We climbed back into the 4Runner and headed northwest, on our way to the Guadalupe Mountains, Arizona, and Flagstaff for the night.

The drive up to the base of the Guadalupe Mountains was wonderful. The road is decent, there was little traffic, and the afternoon was beautiful. On the other side of the pass, we could see Guadalupe Peak to our right. We found a rest stop/picnic area and stopped. There were a couple of geocaches there and a beautiful site. I made the capture with both cameras (digital and film) and logged the geocache.

On the way down into eastern Arizona I passed an old motel. It was falling apart. I wasn’t going to stop, but thinking about it bit more I decided that if I’m to be a photographer these opportunities cannot be passed. I reversed and went back to shoot a few frames. Before I could stop her, the Girl got a drink from a puddle. I had no idea what that meant, but it was too late to stop her so I forgot about it. She also found a few goat heads and I had to pull them. She doesn’t really like me to remove them, but it’s better than limping about or getting them in her mouth. So, she tolerates me.

We headed on in to Flagstaff and spent the night at the same La Quinta we stayed on the outbound trip. It was not too late when we got there so we had time for a short walk. I think we were both tired and slept well.

I ate breakfast as CoCo’s near the La Quinta. The Girl watched me from the 4Runner, but I was stationed where I could see her (and I suppose she could see me) and there was no pinging. The food was decent and the coffee plentiful.

“It’s the shape of your face. I thought I had it.” We chatted a few minutes about the other tribes in the area, the Apache and the Hopi. She explained some of the differences in appearance to me. I enjoyed the conversation.

When I stopped to refuel, I noticed a mesquite spur in the sidewall of one of the tires. That is not a good thing. I must have picked it up at a small cemetery I stopped at along the way. I love to check out rural cemeteries. They have a lot of history and often have a geocache to find. I remember making the turn around and brushing up against a low mesquite bush. That had to be where I picked up the spur.

The local Toyota dealership was no help. So I drove to a Discount Tire nearby. The tire was leaking. So, the pulled it, replaced it with the spare, and remounted the damaged tire on the spare rim so I’d have something if I needed it. The entire process cost me nearly half a day. I knew this meant I would not make it as far as I planned. So I called ahead to a La Quinta on the north side of Las Vegas to stay there. I would drive home Friday. 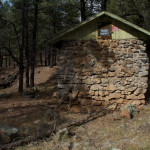 We puttered along the way, listening to music a good part of the time. The Girl likes to curl up in the passengers seat. The window is often down (when not on the super-slab) and she’s within reach. I like to touch her, stroke her head or her side. She’s learned to ask. She’ll reach out with a paw and touch my hand. When I look at her, she gives me that look that says “pet me.” So, I do. We both get something from it.

The Girl is my best friend and my constant companion. She understands me better than most humans, can read my mood and intent, and would rather be with me than anywhere else. We play together, walk together, sleep together, and watch what little TV I watch together. I share some of my food. She’d share her’s if I wanted it. If I go out the door, she’s ready to go too. She pines when we’re separated. So do I.

I don’t own the Girl. She probably owns me. She shares time and space with me and a deep emotional bond. There is a thing about men and dogs, I think. They understand us innately. We can understand them if we take the time. When one does take the time, it’s amazing what happens. It’s like the two species were meant to be together.

Neither of us is perfect. It doesn’t matter.

We spent the night at another La Quinta, this one on the north side of Las Vegas. We walked a bit both evening and morning. We headed home pretty quickly Friday morning. I found a Denny’s where I could park and see her. So, I had some bacon and eggs and had them make a couple of scrambled eggs for the Girl. I had to let them cool a bit, but she likes scrambled eggs. Then we were on the road home.

We stopped to pick up a few geocaches along the way. One location is near the Nevada Test Site and I could hear heavy machine-gun fire off in the distance. I guess it was practice day.

I stopped on the west side of Tonopah to make a couple of images and pick up a geocache (Lonely Mountain, I think). I also needed a bite and the care package one of my friends sent along was the thing. The apples and cheesy crackers were good. While we were standing there, I heard a motorcycle approach. The engine cut out, then restarted, then cut out again. The rider pulled over to the side and parked the machine.

When we finished, the rider was still there, so I reversed and drove up to him. He was a young man, maybe a twenty-something, with dark hair and eyes.

“Would you have some gas I can buy?”

“Nope. I don’t have a spare can with me in the car. Do you have a cell phone? It’s about ten miles to Tonopah.”

“Yes. I thought I could make it from Reno to Tonopah.”

“That’s a long freakin’ way.” I thought about my own long rides and the couple of times I ran out of fuel. As I turned to leave, he had the phone up to his ear. “Do you have a signal?”

“Yes.” And so we left him to his devices. I was reminded that I should carry a spare bit of fuel in the 4Runner. Even if I carried a one-gallon can, it could help me or someone else along the way. Maybe I should add that to my list of “necessaries” that need to be in the back of the 4Runner when I go out on my long trips. I am expecting more long trips in the future, not less. I think I’ll find myself being something of a nomad sometime in my future. I’ll have a home base, but will range out in search of images and words. We will see.

It was time to make the run home. I had only a couple more geocaches on my list. We stopped to pick them up along the way and then just drove. The Girl settled in beside me for the last push. I had music from the satellites to help me get through. I could feel the draw of home and my own space pulling. So, we drove.