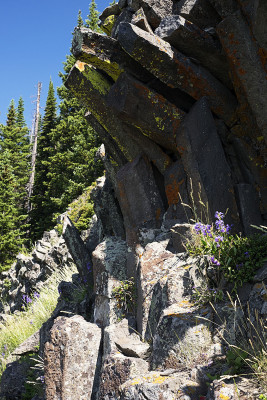 The Girl and I left Denver on Friday, 3 July 2015 headed for western Nevada. I had some personal business there that needed my attention and I wanted to retrieve some things from my storage unit. Plus, it was just time for me to get out of Denver.

Older Son and DiL live on Capitol Hill in Denver. It’s a busy place and deep in the city. So, it has all the noise, commotion, and energy of a city. Although the place where Older Son and DiL live is fairly quiet, and the window A/C units we installed while I was there provided quite a bit of white noise, I could still feel that city-energy. After a couple of weeks, I just needed to be out of that.

I originally intended to stay in Steamboat Springs, Colorado. But I was unable to reserve lodging there so elected to go on a bit farther west and stayed in Craig, Colorado. Craig is not a small town at all; but it isn’t a city and the vibe there was calm, orderly, and a slower pace of life. But, I’m ahead of my story.

I left Denver and drove north on I-25 to Fort Collins, where I turned west on CO 14 — the Poudre Highway. Heading up into the foothills was quite busy as many folks were headed for the mountains (and I learned later, Steamboat Springs). Although I stopped for a couple of geocaches, I felt uncomfortable with all the traffic and eventually blew off searching for more hides. I elected to relax, enjoy the drive, and enjoy the river.

We stopped several times along the way to enjoy the warm mountain air (we also drove with the windows down and the A/C off), stretch legs, and make a capture or two. There was no reason to hurry as my mileage for the day was less than 300 miles.

When we arrived at Steamboat Springs, Jumping Jehosaphat! The town was crazy-busy with folks there for the 4th of July celebration. It was no wonder that no lodging was available. In any event, I was thankful that there was no lodging available as I would have simply traded the Denver energy for Steamboat energy. That would not have been a good thing.

So we drove on, thankfully.

About an hour later we arrived at Craig, Colorado. It was bustling, but the vibe was much calmer and my intuition told me that this was a good thing. Our motel was on the west side of town (missed it the first time), so we pulled in and walked into the office. The manager was there, remembered my telephone call, and checked me after consultation with an Asian woman (his wife?) about which unit would be best.

I backed into my parking spot so I could unload a few things from the 4Runner. I opened the door and looked around. The room was large, definitely old-school, and fine. I tossed the spread on the floor and brought in a few things. The Girl and I mounted back up (man it was hot) and drove to Walmart to reprovision for a couple of days. At the Walmart, we bumped into the manager who greeted us, “At Walmart already?” I laughed and bought a couple of salads, some fruit (bananas good!), and a six-pack of Coronas to celebrate our survival to date. Then we returned to our room.

I elected to boil a couple of eggs for my chef’s salad. It was my first use of the Pathfinder canteen stove I bought and my Trangia burner. I elected to sit outside my room because I was uncomfortable with the combustion products of the methylated spirits used in the Trangia. The wind gave me a little trouble and the simmer ring of the Trangia is, as the Brits say, “fiddly.” But I got my eggs boiled and learned a bit about using the stove and the process was relaxing (along with a Corona). The addition of the egg made the salad much better.

The Girl nibbled kibbles while I ate my salad and surfed the TV a bit. Yep… I still have little use for TV.

We rose early on the 4th and drove into town to find some food and coffee. We stopped at the local CoC and I found a self-guided tour of the area north of town in Routt National Forest. So we drove back to our motel, gathered up a few things to take along (camera, lenses, fruit, water) and headed out. Along the way, I found a big grassy area at the local middle school (out of session), so the Girl and I had a big play, refueled, and headed out on an adventure.

Once off the state highway, the route was all gravel road. We stopped to look for a couple of geocaches, but I lost phone signal and had not planned ahead, so there wasn’t much of that.

What there was, however, was a nice climb up to 5,000&endash6,000 feet and the commensurate cooling. The sun was pretty, there was a little breeze, and the temperature was wonderful!

As we drove along, I noticed a bluff of columnar basalt. I stopped the 4Runner, got the Girl out, collected my camera, put on my boots, and we started up the hill. After just a few steps, a big mule deer jumped up, snorted at us, and bounced over the ridge. I didn’t have enough lens to capture him, but the capture is in my memory and will always be.

After a few minutes of hiking up the hill, I puttered around the bluff while the Girl did her thing. I have a few more captures that I still need to process.

The remainder of the drive was interesting, especially the Bear Ears (a pair of mountain tops). It was a good way to spend the Fourth of July — much better than hanging out in town. We were both tired and hungry when we got back to the motel. So, we ate, drank, and then cuddled before it was time to go to sleep. The fireworks bothered the Girl some and she stayed close to me. But she settled down after a bit and only stirred again for the finale.

It was a good day.