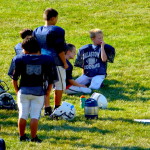 “Football season is our busiest time of the year,” Daughter said. She was being honest. It’s been a very busy week. But, I’m ahead of myself.

I finally buckled down and drove out the remaining miles to Daughter’s home. I spent a lot of time on the turnpikes (which I deplore) and another night in a motel. I did pause to pick up geocaches in states where I had not found any so as to collect the “souvenirs” for those states. The pauses gave me an opportunity to see some of the country that I had not seen. But the focus was on “getting there.”

Daughter has a wonderful house. They are in the process of filling it in as time and money allow. The grandsons are wonderful, as I expected. I’m deeply enjoying spending time with them. I’ve watched more TV than I have in years, but it’s fun to simply be with my family.

Daughter is amazing. A deep calm strength emanates from her. There is confidence there and well as competence. The boys are attentive and respectful. I expected that, given their Father. It is good to not have to be the one in charge for a change. I am not the leader here, just a beloved family member. It is good.

I’ve been going to football practice with Daughter and Younger Grandson (YG). Daughter and I sit on the sidelines and observe while YG works. He’s got a great attitude and is not afraid to mix it up a bit. He’s learned a lot, I can tell. I shot a bit of video of his workouts and will share that material with Daughter. She can do whatever she wants with it.

Saturday was the YG’s first scrimmage this year. OG, Daughter, and I sat on the sidelines (along with the Girl in her training vest). It was hot and humid, but not awful. I think I finally got some Sun on my right leg, which is usually shaded by the 4Runner when I’m driving. I have a farmer-tan on my left side and it’s time to balance it out a bit.

The scrimmage was round-robin style. With the exception of one team, it was fun to watch. The lead coach of one team was a total butt. He was screaming at his kids and had a generally bad attitude. I’m thinking he’s a candidate for the antagonist of one of the Karate Kid movies. These are ten-year old boys, for goodness’ sake, not professional players. There’s a lot of learning for them to do and it can be done in a far better way.

Friday we drove up to Gettysburg to visit the national park. I put the Girl in her training vest and she was perfect! She went right to work, stayed close to me, was very attentive, and did exactly what she was supposed to do. We visited “The Cyclorama,” which is a huge oil painting of Pickett’s Charge and is accompanied by a soundtrack. There were several cannonades, which the attendant warned me about. Although the Girl didn’t like the loud noises, she only trembled a bit and realized this was not thunder.

They made us take the elevator to avoid the escalator. I didn’t remember, but the Girl knows escalators and has no problem with them. I have video of my lead trainer working her on the escalators at the airport last Christmas and the Girl did great. But, she knows elevators too and was fine with it, even as herky-jerky as it was. They put us in the handicapped seats so the Girl could place next to me. I put her in a down-stay and she was fine. The cannon blasts and rifle reports disturbed her a bit, but not badly.

We drove part of the CD-guided automobile tour. The entire place has a sense of the holy about it. I want to go back and spend more time there. They have a number of short hikes to various places that would be good to see. It is also possible to hire a guide to go along to tell the story. I want to spend time there with my cameras, but that will mean getting up early to get the good light.

Pennsylvania reminds me a lot of Missouri. There’s lots of vegetation, the air is warm and humid, and wildlife is abundant. I stepped out the back door with the Girl Sunday morning for her morning outing and watched a wild turkey at the treeline between lots. That was a sight I haven’t seen in a long time.

I’m very happy I decided to come here. It’s good to be with family, I haven’t seen Daughter and her family in two years (since Wife died), and it is good to see new lands.

2 thoughts on “Pennsylvania and Football”