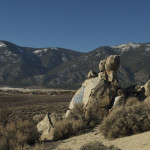 I captured this image Saturday morning on our hike and just love this image. It was just a little late in the morning and the light is a bit flat, yet the texture of the granite outcrop is there and the muggle sign is plainly evident.

Why someone was moved to spray paint the rock is beyond my understanding. It’s a form of environmental vandalism and I don’t like it. The rocks have a natural beauty and tell the story of the landscape without paint.

But, the Girl and I had a good time exploring these rocks. I looked for a geocache; she looked for wabbits. When I called her in, she was grinning and panty. What a funny girl.

We heard voices coming from down the hill. Another couple of groups formed up for the hike. It was getting late anyway and I had a few more things to do. So we headed back for the 4Runner and for the house. On the way down the hill, I kept the Girl close. A couple of hikers approached from the opposite direction, so I asked her to sit while they passed.

He’s right, of course. She wanted to run over and sniff them. She thinks everyone wants to be greeted. I generally make her wait until she’s invited, because so many people are either afraid of dogs or are uncertain about pit-looking dogs. We don’t need to encourage bad (human) behavior. But, she waited patiently (off leash) until they passed and then we continued back down the hill to the 4Runner. She ran over where they passed and sniffed around, peed (of course), and then we were on our way. She stayed close all the way back to the truck.

Later that day we drove to Sparks to meet Jimmy and have coffee. While we were hanging out at the Camera Clinic, another photographer we met last summer entered the store. Jimmy knows him well. The photographer was telling a story about how he waited for two hours for an eagle to fly off its perch so he could capture the launch. As he described how “Of course, it flew that way!” he stepped forward, sort-of toward me, and quickly stretched out his arm to indicate the eagle’s direction.

I heard a very low “grrrrr…” emanate from the Girl. She dropped her head and took a step forward. I called her back and asked “What was that?”

But, I quickly figured out that she took the photographer’s step forward and outstretched arm as a threat. He was warned. He quickly called her over, held out his hand, then sat on the sofa to pet and reassure her it was all good. She was fine. She just didn’t care for the sudden motion in my general direction and the intensity of his projection.

Did I say she’s my best friend?

Now it’s Monday morning, early. I have a few things to accomplish today. Later this week I head for a field trip to walk one of my project sites in southern Nevada. The time out will be good for me. I’m hoping for some time to capture some images while I’m out and about. I might even have time to find a geocache or two.

I put away my Keurig this morning. I’m still going to use it, but for everyday use it’s pretty expensive. The prefilled K-cups cost about a buck apiece. I was using three or four of them per day. That’s a lot of bucks. Mr. Coffee will make a pot for about a quarter. I preheat my Stanley thermos bottle with hot water and it keeps my coffee warm all morning.

The Keurig is a great machine and one I’ll continue to use when I just want one cup of coffee. But, when I want my morning coffee, I’ll make a pot and save myself some bucks.